It has been a while since I have written, but I am happy to say that Skipper continues to do well with his chemo treatment. We did have one minor complication. During his chemo treatment with the Doxorubicin, a little bit of the fluid leaked out at the IV point. Skipper licked his leg all weekend, and we took him back to Vet. Doxorubicin can be deadly if it comes into contact with the skin, and it can lead to more serious complications (in extreme cases, amputation might be necessary). We were lucky though. The Vet placed a bandage around his leg (which Skipper took off 3-4 times), and after a week, the affected area of the skin returned to normal (albeit, a shade darker). However, if that is the only complication so far, I count my blessings.
Throughout this whole ordeal, we have been spoiling Skipper, and trying to make him as comfortable as possible. Last weekend, for the first time in his life, Skipper had some filet mignon! He was so excited, I think he forgot to chew and just swallowed it. It is hard for me to think that if we did not take action, he may not be with us. Despite the horrible thing that is cancer, the chemo treatment is worth it. Skipper continues to act like his normal self. He does appear to have aged a little bit in the last month and half since we started the chemo, but his spirit is very much alive. If you saw Skipper, you would not even think this is a dog with cancer.
We're on week eight of our Wisconsin Chemo Protocol. 17 more weeks left, which may seem like a long time, but these first eight have already gone by quickly. Skipper's hematocrit, or HCT levels, which stabilized initially with the chemo, have actually started to slowly climb back up. He continues to be anemic, but he is improving. As always, though, our biggest indicator is Skipper's quality of life. As long as the beagle howls, we know Skipper is having the time of his life.
Posted by Skipper's Story at 20:23 No comments:

There is a great quote from the new Star Trek movie, where a young Cadet Kirk, having been caught cheating on the infamous Kobayashi Maru test, says to Spock, "I don't believe in no-win scenarios." The Kobayashi Maru test has no real way to win, it is suppose to confront every Starfleet Academy cadet with "..fear in the face in certain death." Every cadet is suppose to fail the test. When I think of Skipper's condition, I sometimes think of the Kobayashi Maru. Skipper is essentially facing a no-win scenario. Lymphoma can not be cured, only placed into remission every once and a while. But the problem is I don't believe in no-win scenarios either. I can't cheat cancer like Kirk cheated the test, but I can redefine what it means to win against cancer. If I can help maintain Skipper's quality of life as high as possible, then the cancer can not win. I don't like to lose, and I'll be damned if I'm going to let cancer ruin my dog's quality of life.

We are on our third week of chemotherapy. Skipper's treatment this week consisted of Vincristine, the chemo which he appears to tolerate very well. The doctor has lowered his Prednisone levels to 1 tablet a day from 1 and a half, but Skipper still has a ravenous appetite. Overall, he is doing well. His blood levels are holding steady, and they are no longer in decline. You could barely tell he has any kind of cancer, and that is fine by me. On a more personal note, my grandmother passed away today. It has been a rough start so far in 2010, having to face Skipper's situation, and my grandmother's passing. But I have to try to keep positive, both for my family, and of course, my dogs...
Posted by Skipper's Story at 18:31 No comments:

The Good Word of the Day is Hematocrit

We are now entering week two of Skipper's chemotherapy treatment, and we had our first CBC blood test since we started the chemo treatments. The results were overall positive in that the white blood cell counts are holding steady, and Skipper's hematocrit level has actually gone up. Hematocrit is, according to wikipedia's definition, "the proportion of blood volume that is occupied by red blood cells". While the vet was diagnosing Skipper, one his key concerns was the hematocrit level. The hematocrit level, along with his red blood cell count was reaching dangerous low levels for Skipper, and it was indicating that he was becoming anemic. We were very happy to hear that this has started to turn around.

This week's chemotherapy drug was Cyclophosphamide, given to us in pill form. We actually had to go to our local pharmacy to get the drug, and we are giving Skipper a pill each day, for four days. It was a bit unusual to fill out patient information for dog at a pharmacy for humans; we have always received our pet medications from the vet. But so far, Skipper is doing well. He does have quite a bit of a ravenous appetite when it comes to food, but otherwise, you could not tell that he has cancer. He has returned to his normal activities. Just today, he barked at some kids who were running in our lawn, probably telling them, "Get off my lawn you darned kids." I hope the medications continue to work for Skipper. They are providing a great quality of life for him so far, and we could not have scripted the first two weeks of treatment any better. However, I continue to approach this situation with guarded optimism. We still have 23 weeks left of chemotherapy treatments, and a cancer that is considered by veterinary science as incurable. But, so far, so good. :)
Posted by Skipper's Story at 00:15 No comments: 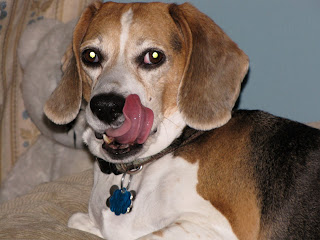 Without any treatment, Dogs with Lymphosarcoma usually have about about 4-6 weeks of life from diagnosis. That was an option I was simply NOT going to accept. Currently, the best treatment to extend Skipper's life was chemotherapy. Most people are familiar with the horrible side effects of chemotherapy in humans. We did not want to put Skipper through such misery. However, after doing our research, and checking with our vet, we were told that the side effects were not as bad in dogs as they were in humans. Now, do not get me wrong, chemotherapy in dogs uses many of the same drugs as in humans, and these drugs are essentially poison. I still feel apprehensive about introducing poisons into my dog's body. But as long as Skipper's quality of life remains high, chemotherapy remains our best chance of winning against cancer.

Shortly after the veterinarian told us we were dealing with Lymphosarcoma, we did research all weekend on the internet to look at the possible treatment options. We decided to go with the Wisconsin-Madison Protocol for the chemotherapy treatment, named after the school where it was developed, the University of Wisconsin (Go Badgers on this!) . The Wisconsin Protocol is a six month (25 week) treatment, using 4 chemotherapy agents; Vincristine, Asparaginase, Cyclophosphamide, and Doxorubicin. Prednisone is also part of the treatment, and is given in pill form, at least for the first few weeks. Skipper had his first Chemo Treatment with Vincristine, on Tuesday, January 12th, 2010. The following day, he was given the Asparaginase. Going forward, we should only have to take Skipper to the vet once a week for his chemo treatments.

After the first week, the noticeable side effects have been minor. Skipper's appetite has increased substantially, which the doctor told us would happen, and he has had some loose stools and diarrhea, but that has been the extent so far. Within 24 hours of finishing his first week chemo treatment, Skipper has been more active than he has been the last 3 weeks. He proudly howls, and walks around the house, sniffing for food like any other healthy Beagle. We are encouraged by the early progress he has made. But we still have a long road against us. Skipper's condition, like most cancer patients, is delicate, and we expect there to be some highs and lows for us in the future. For now however, I will take the fact that he appears happy and active.
Posted by Skipper's Story at 14:15 No comments: 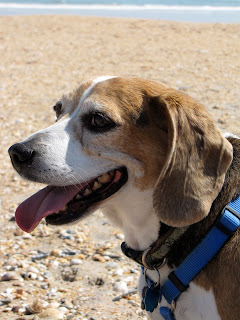 I will never forget Friday, January 8th, 2010 at around 3:00 PM. It was the day the Vet called to tell us that Skipper had Stage IV Canine Lymphosarcoma. My heart sank, and I bit my lip as the doctor described with a sympathetic tone the results of the ultrasound. He had mentioned the possibility that it could be cancer when we first took Skipper in earlier in the week. But even then, you are not fully prepared to hear the news that a loved one has cancer. You just want to believe that it is something else. The news hit me like a ton of bricks.

Skipper is a tri-colored Beagle, born on December 13th, 1999. We have been together since March 2000, when I was a junior in college. He has always been a very loyal and trusty companion. He has seen me graduate from college, get my first job afterwards, seen me get married, and has made me smile and laugh countless times. He has given us 10 great years, and physically, you wouldn't even be able to tell he has Lymphosarcoma...

See, there is no cure for Canine Lymphosarcoma. The best treatment option involves chemotherapy to force the cancer into remission. On average, dogs live about a year from diagnosis. However, I have been told that the quality of life during this time for dog is usually high, that dogs do not suffer as badly as humans do with the chemo. Without treatment, Skipper has one month at best. So we owe it to Skipper, both my wife and I, to give him the best quality of life as possible, for as long as possible. I have decided to blog about our experiences with this cancer so that others can learn about it. I hope to post about how the chemo treatments are going, the challenges, the highs and lows, and more importantly, Skipper's quality of life. What you have to understand is that Skipper has quite a bit of fight left in him, and as long as he shows fight, he will do everything we can. Skipper means so much to so many people, and he brought such joy to us, it is the least we can do for him.
Posted by Skipper's Story at 20:08 No comments: